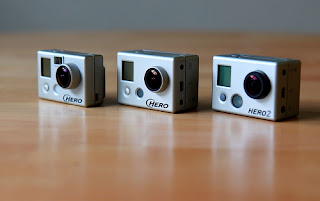 UPDATE: Today 10/24/2012 a week later.
I sent another e-mail to every e-mail address on their contact page and the e-mail
made it through.  The photo has been taken down and I am happy.
I originally wrote this post and the video when I had no luck through twitter or e-mail.
I don't think either helped, but there was some interesting discussion on my Youtube
video.  I think it is very important for all content creators to stay vigilant in protecting
their intellectual property.  Even something as silly as a small photo on a blog post.
It is important.

I had hoped to spend my weekend finishing one of several videos I have been working on,
but then the new GoPro Hero 3 came out and changed my plans.
On Wednesday 10/17/2012 GoPro announced it's new Hero 3 camera.
Like all GoPro fans and users I went looking on the web for pictures of the new camera.
What I found is very small but in many ways is a big deal to me and journalists everywhere.
Celebrity photographer educator Chase Jarvis posted a blog with photos of the new
camera he got while attending the GoPro party in San Francisco.
At the bottom of his post was one more small photograph.
The photograph belongs to me.
It had no attribution, no link through to my blog, no mention of the photographs creator.
The photo had been copied, pasted and RENAMED. 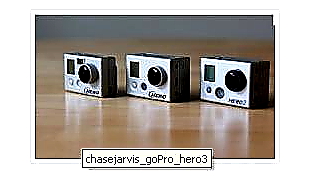 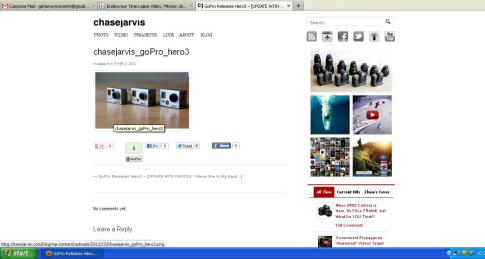 I posted this photograph on my blog back in August.
I thought it might be fun to start getting an online conversation started about the
GoPro Hero 3 and what features it might have.

Now, Chase Jarvis is a professional photographer.
He has cameras.
He knows how to take a picture.
Why would he ever take someones work an put his name on it?
It does not make sense.

I E-mailed him.
I tweeted him.
I have done my part.
Taking from others is wrong.
So, let it be known.
This is not cool.

UPDATE:
I have left the video up but only as a private video
Here is a video about this I posted on YouTube.

Posted by Getawaymoments at 11:04 AM